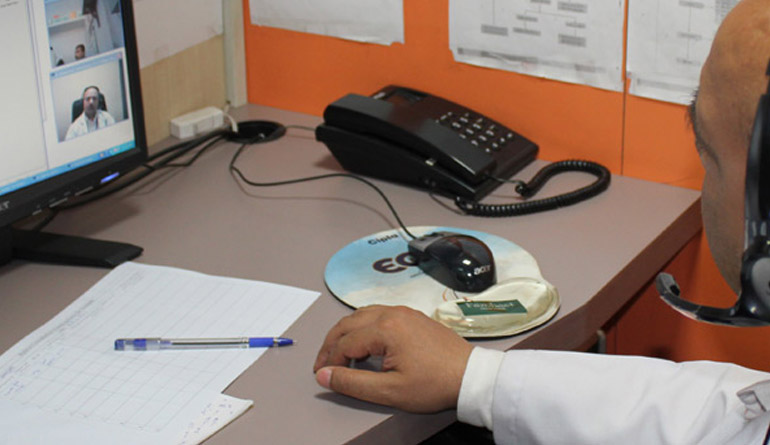 A combination of simplicity and human centric design has been the cornerstone of WHP's use of technology. This is because the rural and other underserved communities that ourprogrammes focus on have weak infrastructure, high levels of poverty and human resources which are often sub-par. WHP designs its technologies so the simple and intuitive front-end largely limits itself to registering symptoms and data on a simple format which are processed and transmitted to highly sophisticated systems and human resources in the back-end. The design largely requires persons at the front-end to enter only numeric values since WHP's extensive experience shows that rural communities have difficulties in adopting systems that expect them to enter text. (One of the reasons why mobile phone telephony has exploded across the developing world even among partially or illiterate populations is because the input skill needed is numeric.) Any requirement for responses in text are pre-coded to be available on a point-and-click basis. WHP uses specially developed applications that compress data so they can be transmitted even when the connectivity is weak.

Doctors in cities can connect, irrespective of where they are located, with village centres through special applications that are accessed through the internet.

The doctors use browser-based algorithms that standardise the processes and help them with computer-aided differential diagnosis. They use many dropdown menus of morbidities, diagnostic tests, and medicines to expedite consultations. A number of frequently used phrases are pre-loaded on the system which they can select quickly by pointing and clicking instead of writing. These instructions and comments can print in the local language on the prescriptions issued to patients while they will be stored in English in the electronic medical records.

WHP's Althea system has an innovative design. A specially developed application is loaded on a front-end laptop or tablet, and is used as a platform to integrate both commonly available and specially developed diagnostic devices. A front-end provider can use the system on her own for tasks such as screening of patients or as a channel to connect the patient with city doctors. The system currently uses devices to measure blood pressure, pulse, temperature, blood sugar, blood count, foetal sounds and cardiac signals, with provision for adding otoscope (for ear examination), dermascope, vaginoscope and colposcope. The system can work in any digital environment ranging from 2G which is universally available to 3G, 4G and internet. (Better connectivity enables higher quality of services.) The village facilitator uses pre-coded checkboxes in the local language so writing text, the biggest bugbear for semi-literate populations is completely eliminated. An algorithm combines the symptoms registered by the village facilitator with the basic vital parameters and patient history to generate differential diagnosis for the doctor. The system also provides task lists for predictable services, such as estimation of gestational age, growth monitoring, and immunisation.

Each interaction is captured and stored in the internet cloud as an electronic medical record (EMR) under a unique patient identity which makes referrals easier. The EMRs also provide an opportunity for remote monitoring and pattern recognition through analytics.

The Althea system can transmit live videos and audio in real time. There are pragmatic, built-in features to handle non-supportive situations such as a sharp drop in bandwidth when the system will automatically switch over to only audio or to still photographs instead of streaming images until the bandwidth strength is restored. These features ensure that the consultation can continue uninterrupted.

Medical resources available to serve rural communities are vastly inadequate in almost all parts of the developing world. This brings huge pressure on the available doctors and nurses, especially those deployed in the public sector who often are the first point of contact for these communities. Any new solution will have to be sensitive to the time constraints these providers face. (The Indian government's finance ministry uses four minutes per consultation for its cost calculations. In reality, it is significantly less. In developed countries a general practitioner spends almost 20 minutes.)

WHP has developed tools for the back-end to assist the medical personnel conduct expeditious and standardised consultations that are also of high quality. Task sharing and computer-aided diagnosis are an integral part of the design. Nurses and health assistants feed symptoms, vital parameters and family history into specially developed algorithms which generate differential diagnosis for the doctors. A global team of physicians assisted WHP's team of doctors to develop the algorithms which were further refined over 245,000 consultations (as on March 12th 2020) WHP's doctors have delivered digitally.

An interesting feature of the design is the automatic generation of a list of the most probable investigations and medicines for each diagnosis which will enable the doctor to quickly select her choices and doses just by pointing and clicking. In case the doctor wants to overrule the differential diagnosis suggested by the system, she can access the entire International Classification of Diseases' of the World Health Organisation. Each selection from the 14,000 entries also auto-generates probable investigations and medicines with quick synoptic notes and web links for further details.